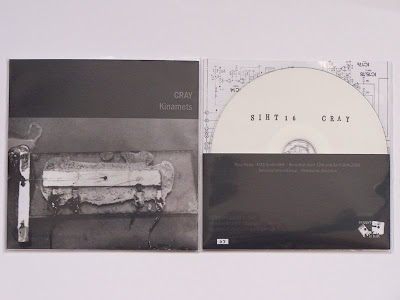 Cray - Kinamets (siht16) (SOLD OUT)
date of release: 31.10.2008
format: cdr
copies: 50
Info: Cray is Ross Healy of Melbourne Australia, Ross has been making electronic music under various monikers since the early 90's for labels in Australia, Germany, France, United Kingdom, Ireland and the U.S. This is his second full length CD after 7 years in hiding. During that time Ross had sold everything he owned and moved to the country to get back to basics. Kinamets is NOT a drone record and is more in the form of early academic synthesizer recordings, it was recorded live on a EMS Synthi AKS .
Posted by snapped in half at 3:56 p.m.